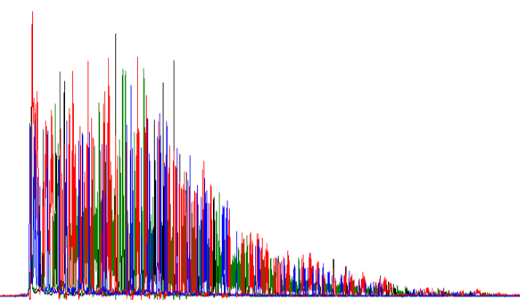 These are the processes that are typically involved in Sanger sequencing:

The first step is the production of a DNA template for a distinct PCR type known as a chain termination PCR. This works similar to a standard PCR, but with one main difference in the use of di deoxyribonucleotides, a type of modified nucleotides. These are added to a growing DNA strand by the DNA polymerase, which catalyses formation of phosphodiester bonds between nucleotides.

The second step in Sanger sequencing involves separating chain-terminated oligonucleotides. This is done with gel electrophoresis based on size. The DNA samples are loaded onto a gel matrix on one end, and an electric current is put through the mixture. Since a negative charge is carried by DNA, the samples should be attracted to the opposite end. Analysing the speed at which the gene molecules move is the only way to determine their size since they will have the same unit per mass. This allows them to be arranged from smallest to largest.

The final step involves the analysis of the gel for resultant DNA determination. DNA polymerase is only able to synthesise DNA in the direction of 5’ or 3’, beginning from the region where primer is incorporated. Because of this, each ddNTP corresponds to the complementary basis that were present in the original sequence of DNA.

Even with the development of more recent DNA sequencing technologies such as third-generation and next-generation sequencing, Sanger sequencing is a common choice in elaborates and is used extensively in the industry as it has many benefits. Not only is it a cost-effective method, but it also has a 99.99% accuracy. It allows for the targeting of small genomic regions that belong to a larger number of samples and allows the sequencing of a variety of regions to be carried out. It can be used in the identification of viruses that cause a single disease.