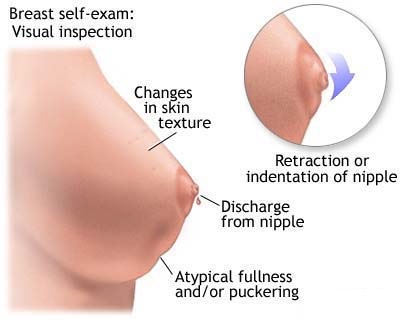 What are the symptoms of breast cancer?

A change in how the breasts or nipple feel: Many a times you may notice an unnatural feel in the breasts and is considered to be one of the most common symptoms of breast cancer. In such a case, the patients may encounter following disorders:

Any nipple discharge (clear or bloody discharge): This symptom should not be confused with breastfeeding. Any unusual discharge from the nipple apart from milk is considered to be dangerous. This discharge then may include:

Severe breast pain: Breast pain is another very common breast cancer symptom and is often neglected as chest or physical pain. Many a times, pain in the breasts is not a cause of cancer but sometimes it might be. In breast pain you may encounter:

Breast may appear inflamed, red and hard to feel: This symptom usually is seen in the later stages if the breast cancer is not well treated in its early stages. This disorder may then include:

Rashes on and around the nipple: This symptom is usually known as the Paget’s disease and is a form of breast cancer. In this disorder, the breast suffers from problems like:

See also  Does Breast Cancer Risk and Estrogen Levels have a Correlation? Understand it Here