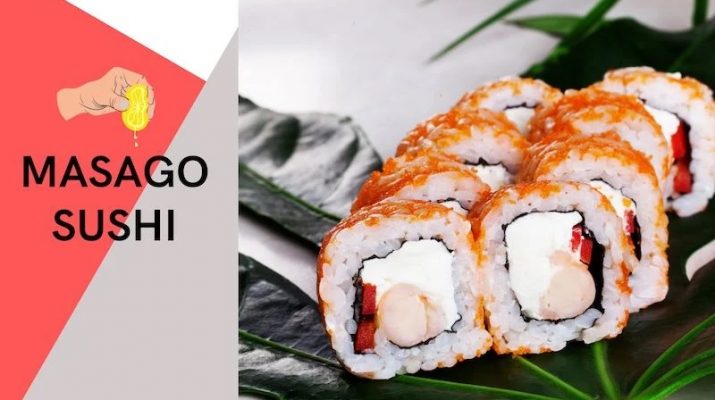 Masago is also popularly known as smelt roe. They are edible eggs of Capelin fish (Mallotus villosus) belonging to the smelt family. It’s commonly used to coat the outsides of sushi rolls as well as in the preparation of sushi fillings. It is also commonly seen in the colors orange, green, or red, although it is truly a delicate yellow color. They use food coloring to tint it orange, green, or red when cooking. Masago is one of the most coveted sushi ingredients. Despite their diminutive size, these small orange balls are capable of elevating a plain sushi plate to something more opulent and sophisticated. They have a crunchy texture, and the flavor is salty & sweet with a trace of bitterness. Masago has a high nutritional value as well as many health benefits.

The top health benefits of Masago include:

Masago is an excellent source of protein. 6 grams of protein can be found in a small portion of roughly 28 grams. This is about the same amount of protein as a large egg weighing roughly 50 grams. Including foods like Masago in your diet will help you eat less while still getting enough nutrition. The body will be pleased in this manner, and weight loss will be possible.

Compared to other large fishes like mackerel and swordfish, capelin has a low mercury content because it is a small feeder fish. Furthermore, when compared to other parts of the fish, such as muscle tissue and certain organs, research has shown that fish roe has the lowest mercury concentration. That is why eating Masago can help to minimize mercury exposure to a bare minimum.

Omega-3 fatty acids have a slew of health advantages. These fats are polyunsaturated. They are not only a necessary component of one’s cell membrane, but they can also aid in the regulation of inflammation and blood coagulation. Omega-3 fatty acids have been shown in studies to help reduce the risk of cardiac diseases such as coronary artery disease and heart failure. The finest sources of omega-3 fatty acids are fish and their by-products, such as Masago.

Masago contains a lot of selenium. As a result, it is a potent antioxidant for the human body. Seafood contains a high concentration of selenium. As a result, it can help to minimize oxidative stress and improve the thyroid & immune systems. A few studies have shown that eating foods high in selenium can assist to boost the immune system and avoid mental deterioration. Masago is also a good source of Vitamin B-12. Vitamin B-12 is essential for energy production as well as nerve function.

If you’re looking for a strategy to add more protein to your diet, Masago is the way to go. Masago has 6 grams of protein per 2 tablespoons, making it a healthy addition to the diet with various potential health benefits.

Masago also has a high salt concentration. When salty components like ordinary salt or soy sauce are often combined, the sodium concentration eventually rises. Cutting back on salt is the key to keeping blood pressure in check for those with high blood pressure or cardiac problems. Overdoing it on salt can lead to a slew of other ailments, including stomach cancer and bone loss.

Because Masago is a shellfish, some people may be allergic to it. They should refrain from using any fish or by-products. Fish roe includes vitellogenin, which is one of the most allergenic compounds in the human body. The sixth most allergenic food is fish roe found to date. Masago is also widely utilized in the preparation of sushi, a popular dish that has the potential to be unhealthy. Sushi is typically made with farmed fish, processed carbohydrates, and questionable substances. Sushi contains raw fish, which raises your risk of parasite infections and foodborne disorders.

How is Masago better than Tobiko?

Tobiko is a type of flying fish roe, while roe refers to fish eggs in general. If you’re wondering how roe differs from caviar, it all comes down to the family or species of fish from which the eggs are derived (hence all the different names). Caviar is a delicacy that comes from the sturgeon family of fish. It’s commonly salted, and it’s expensive because it’s hard to come by. Roe is more widely available, which is why you can get it for a reasonable price at almost any sushi or Japanese restaurant.

Masago is roe from capelin fish, while Tobiko is roe from flying fish. The first distinction between the two is this! Technically, there are many distinct types of roe around the world because there are so many different kinds of fish, and their roe varies in size and color.

Masago and Tobiko, as you might expect, have a little saline flavor due to their origins in the sea. The roe is small and silky with a slight crunch, and their salty, sea-like flavor sets them apart, although the flavor is subtle and not at all overbearing, which is why they’re widely utilized as a sushi roll topping.

While the flavors of Masago and Tobiko are quite similar, and the two are sometimes confused, there are significant differences between what you taste when you order one or the other. Masago is smaller and less expensive than Tobiko, which is why you’ll see it on the menu more frequently. Particularly remarkable is the fact that, while Tobiko is naturally brilliant red, Masago is much duller and is generally dyed to match the brilliance of Tobiko and make it more visually appealing. Masago is often described as having a somewhat less crunchy texture than Tobiko.

Also, compared to many other foods, Masago is low in calories but abundant in nutrients, making it a comparatively nutritious option. It’s also found naturally and isn’t usually processed, which is always a plus in terms of health. “Tobiko is a good source of proteins, omega-3 fatty acids, and selenium, a mineral responsible for the formation of antioxidants,” writes Izzy Cooking. However, you should exercise caution while eating both Masago and Tobiko: both contain significant levels of cholesterol, so you should consume them in moderation.